The truth is that it is tough to write these things as I have grown skeptical of putting unvarnished thoughts on the internet. Not because I fear backlash, but mostly because words have power and not always predictable ones.

I did one of these last year, but focused it on books to make it easier to write. However, I did not read nearly enough books in 2022 to repeat that, so it is going to be more of a mishmash of things. You can jump to the recommendations section if you'd rather.

2022 was an incredibly weird year personally. It started out well - I travelled to India and thanks to the ability to work remotely was able to stay longer than I had managed since 2018. It was great to see friends and family - some of which I had not seen in a decade. Although I only infrequently catch up with some of my friends, I am very glad to have their continued friendship.

I was back in Canada by the summer, though, and that is when things went awry. I tested positive for Covid and kept testing positive on my weekly antigen tests for the next ten weeks. Canadian summers are not very long and this effectively decimated any chance of enjoying them in the company of others. I was thankful that I was never really sick, though and could continue working. What a weird disease.

Isolating in 2022 was a very different experience than in 2020 or 2021. Earlier there was a sense of solidarity with others, that I am not missing out on life, but now with virtually all restrictions lifted, it was a much more solitary experience. Would not recommend, 0/10.

There were some good things though, like the photography I could indulge in during the isolation, and I mention them in the Recommendations section. 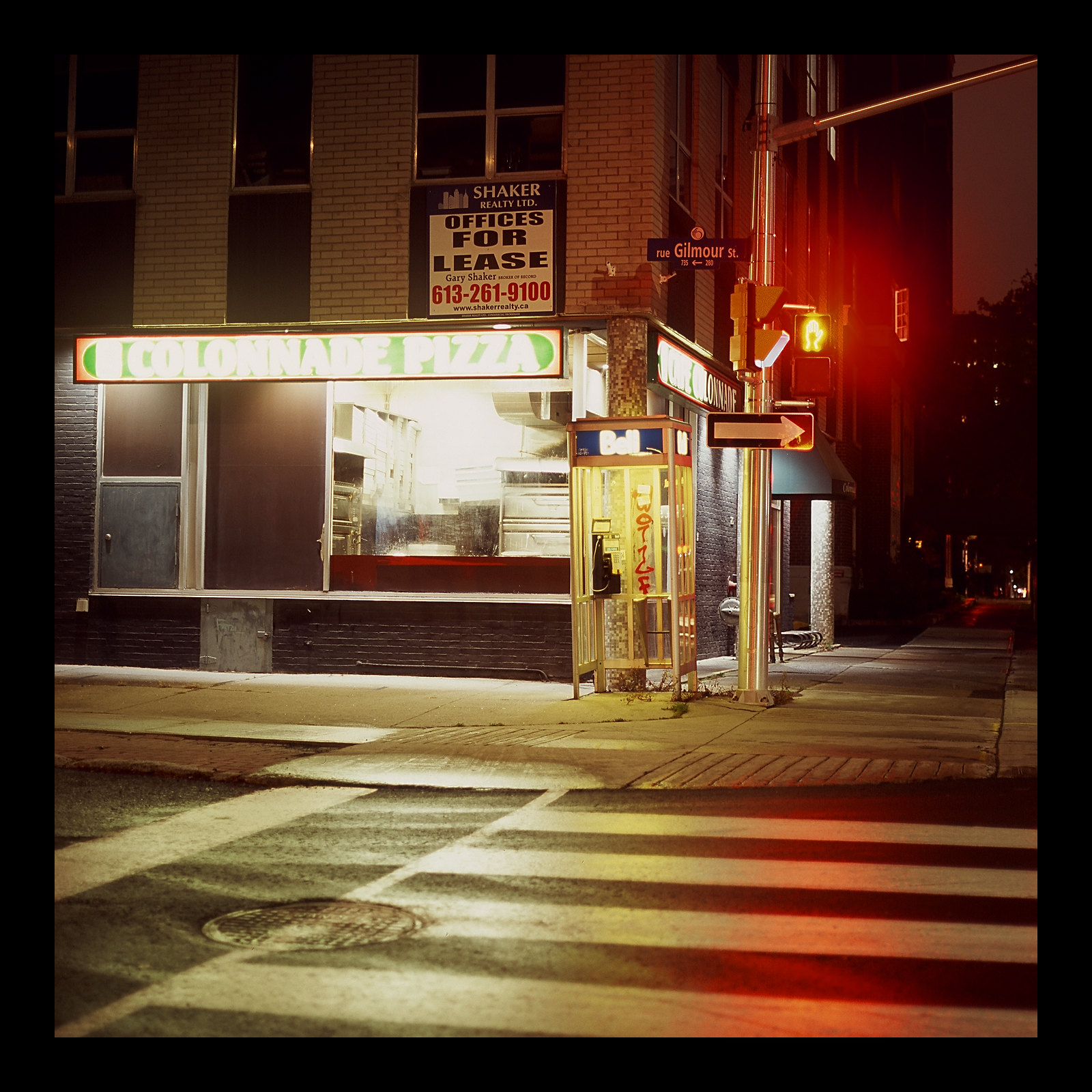 This was the best year at work since 2019 - a combined effect of an interesting project, great teammates, increased autonomy and responsibilities, evident growth and especially because of stability in my reporting structure. Between 2020 and early 2022, I went through 6 different managers. Having a good one for most of 2022 was liberating.

I have also found myself in a weird place in my career where I have teammates who are more productive in shipping code and also other teammates who are better at big picture influence. It is not a problem, but it does make me feel like I am worse at both jobs since I am doing a bit of both. People tell me it gets easier to deal with the imposter syndrome, and I certainly hope they are right.

Despite everything, I enjoyed quite a few things in 2022.

Let's start with books. Although I did not read nearly enough, I read a couple of fantastic books.

A Fire Upon the Deep 🌟

I was amazed to discover a completely new sci-fi writer who can easily be considered one of the greats. A Fire Upon the Deep is an absolute masterclass of science fiction. What impressed me the most is how deep (hah!) Vernor Vinge goes in his imagination and philosophy without losing any of the width that makes a truly great space opera.

A much more hard sci-fi than the previous entry but you expect that from Andy Weir. I would say he does not completely dazzle in this book, but it is still a very strong entry in the genre.

Notes on the Synthesis of Form 🌟

The last book I read in 2022 was probably also the driest but it did not take away from the brilliant clarity with which Christopher Alexander thinks and writes about the problems facing design and how to conquer them. Ostensibly about architecture, this book will help you if you are involved in creating things from scratch in any form. I took extensive notes on the book and will write up a separate review soon.

According to Letterboxd, I watched 51 movies this year. In reality I think I watched maybe 10 more but did not log them. These are movies that I watched this year, but not all of them came out in 2022. I would like to mention a few of them, but you can see the full list on the link above.

Everything Everywhere All At Once 🌟

A masterpiece of cinema, with a powerhouse performance by Michelle Yeoh. Ostensibly a sci-fi movie but in reality it is a discourse on nihilism vs essentialism if you look closely enough. Worth watching for the scene with two rocks in a canyon by itself.

The Worst Person in the World 🌟

You may or may not like this movie, but I call bullshit if you watch the scene with Julie walking home during a sunset over Oslo and it does not make you feel things. If you like the work of Richard Linklater and Eric Rohmer, this will delight you.

The Summit of the Gods

This is a beautifully animated, scored and voice-acted movie. I would have loved to see it on the big screen in theatres with the sound treatment it deserved. I was glad to find an animated movie for adults that took advantage of the medium without relying on it solely for effect.

Is it even a TV show if it is not primarily on cable? Regardless, there are two shows/series that remained with me long after I finished watching.

Recommended to me by a friend, as something I would enjoy being an Agatha Christie fan, it did not disappoint. Fair-play mysteries are extremely hard to do well on the screen. There is no luxury of the space and timelessness of the written word in which to hide that little clue for the readers when the camera is rolling. I think this is the main reason why we don't see many serious adaptations of the genre on screen. What we are left with is either intentional comedies like with Clue, or unintentional ones like with BBC's Sherlock.

Jonathan Creek bucks that trend by being incredibly smart and still playing fair with the viewer. Alan Davies is extremely on form as the magic-trick maker who moonlights as a detective.

After having exhausted almost two decades of episodes, I have tried and failed to find others like it. Death in Paradise and McDonald & Dodds come close in some of the episodes but they are still mainly police procedurals. If you have any hints (wink wink) to other shows like Jonathan Creek, I am all ears.

This was the best series to come out in a while. Smart and funny without sacrificing on the philosophical depth of its ideas (almost sounds like my review of A Fire Upon the Deep, with good reason!), it kept me watching and thinking and watching.

I have no doubt you've heard of it already so I will not write too much about it and will just encourage you to go experience the brilliant writing and world-building of this show.

There are a few other things that are just things, but I still really enjoyed, so I'm bundling them together.

In late 2021, I acquired a Bronica SQ-A - a medium format film camera - from Japan. In the coming months I collected more peripherals around it including lenses and film backs and also stocked up on medium format film before the prices became insane. But it was during my period of isolation that I really started using the camera.

It is thrilling to be using something built 40 years ago for professionals today and especially marvel at the engineering that went into it (there are maybe 5 different mechanical ways it has to prevent you from accidentally wasting a frame) and the quality of images it produces. The first photo on this post was taken with my Bronica, and here is another shot taken with it: 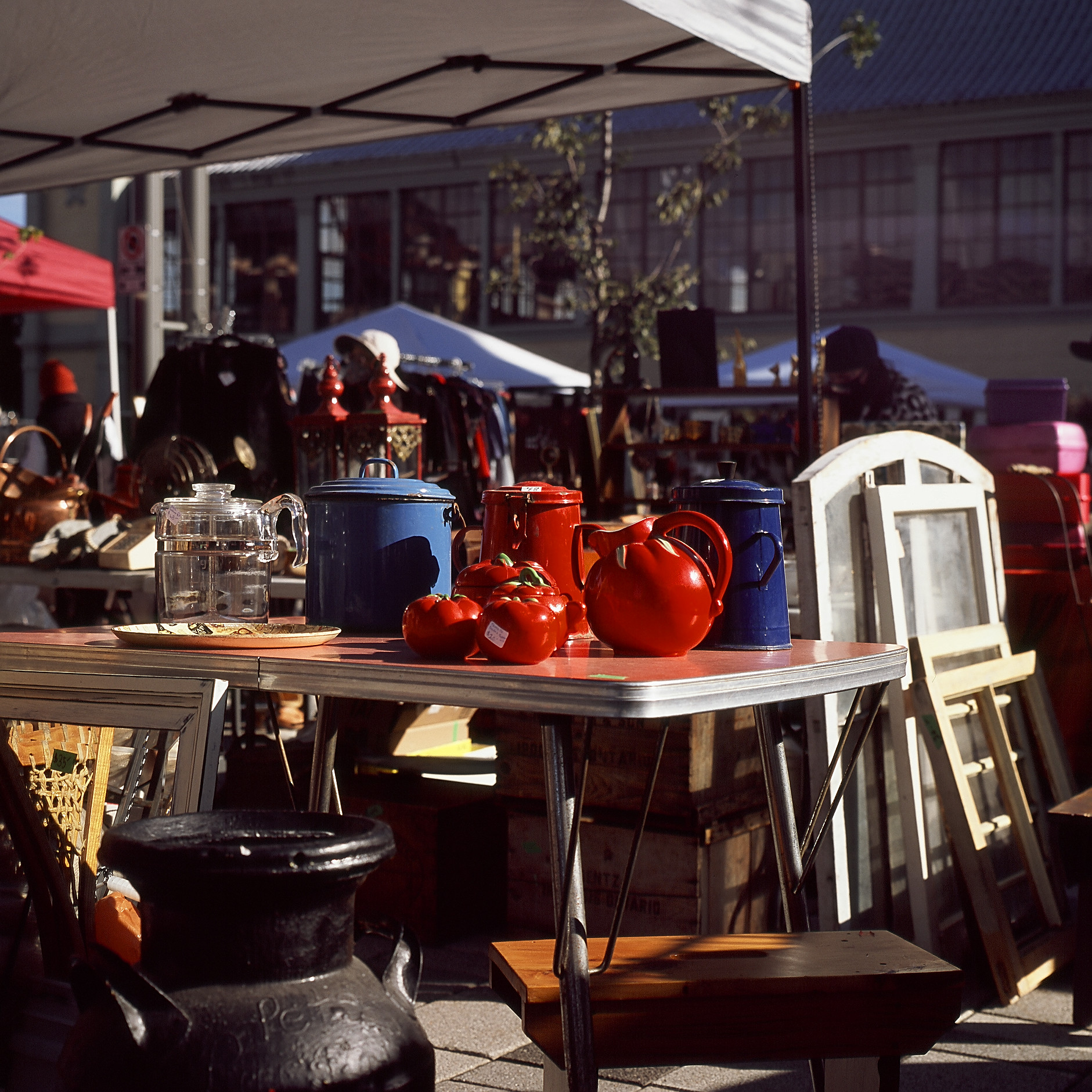 Speaking of old things, after wanting one for over a decade, I decided to acquire a typewriter! The Webster (a Brother brand) XL-747 is a great little piece of machinery from the 1970s. I got it in really good condition which suggested that the original owner did not really end up using it that much. 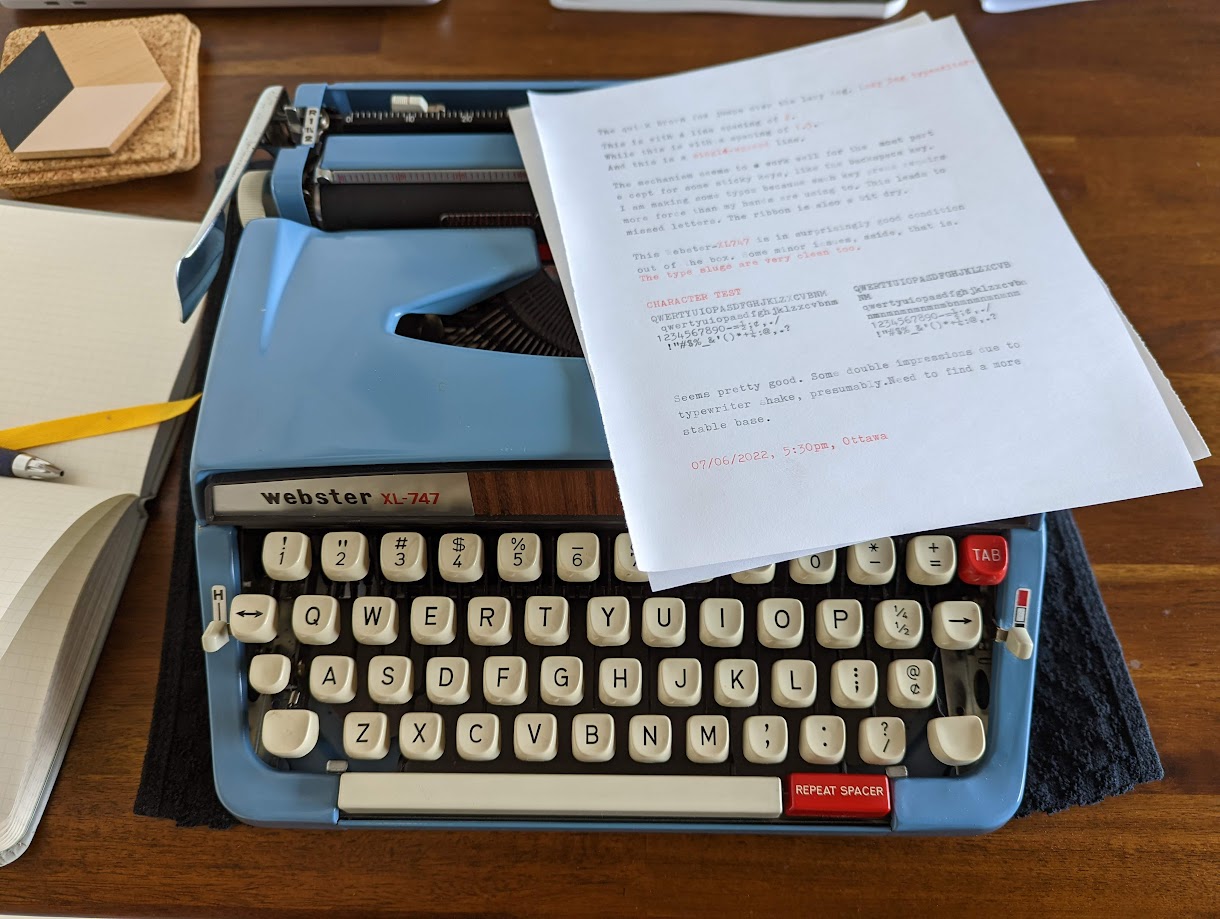 I did have to repair a bent typebar and tighten some screws - a surprisingly difficult task since the screws are all JIS-head ones and I do not own the right tools for them - but that all added to the feeling of “owning” the equipment.

I can't say you should get one, but there is something about slowing down with analog tools and being able to understand all of the mechanics that I have found hard to extract from the increasingly complex distributed systems I build at work.

My beloved Thinkpad turned 5 this year and I had half a thought to replace it with a new machine, especially with the depleted batteries and the ancient processor compared to the M1s that my work provides. However, since Intel and AMD haven't really caught up to Apple in terms of power efficiency, I decided to wait it out a couple of more years and replace the batteries in the Thinkpad.

Can you imagine? User-replaceable batteries in a laptop? With a BIOS update it was like new. It has the exact right selection of ports for me - USB A, Thunderbolt, SD Card, HDMI, Ethernet - a feat few (if any) laptops have since achieved, and the best keyboard on any laptop apart from the aforementioned serviceability.

I am tempted by the Framework laptop and it is the most likely candidate to replace this when I need a new machine, but for now I am happy.

It is just a shoulder bag, it is not cheap, but dammit if it is not good. Extremely modular, aesthetically pleasing, great capacity, comfortable to carry, and easy to lock and unlock. I acquired one this year after breaking my previous sling bag (I can't do backpacks for daily carry).

I wanted something I could trust with my camera equipment but also not be afraid to scratch. When I found this, I was unsure about the looks but to my surprise it is actually better looking in reality than in its product photos.

The Lamy 2000 is the greatest fountain pen ever made. It has been in production since 1966 (57 years!) with an unchanged design. I bought this pen about three years ago and have not wanted to really buy another fountain pen since.

Owning it is like owning a design classic, like the Eames lounge chair, except it is within the realms of affordability and is built to be used. I do not feel like babying it and if anything happens to it, I know it will still be in production. Have I mentioned it is a beautiful writer too?

The weirdest entry on this list, but I have been an Arsenal supporter for 19 years(!) and it would be remiss if I did not mention the scintillating form the men's team has been in the 2022-23 season thus far. (The women's team is always in scintillating form, so glad the men could catch up).

I have found myself feeling increasingly disconnected from sports over the past half decade but the amazing football this season has pulled me back in. If you enjoy football, you are missing out if you are not watching them play.

Of course, it would be just like the universe for this entry to jinx things as the season is only halfway through. 🤞

That's all for 2022, I think. I did have a loose goal of writing half a dozen blog posts in 2022 and I think I published 5 (and wrote one that I did not), so we can call it done. Hopefully I can continue the increased activity here in 2023. Wish you all a good one!